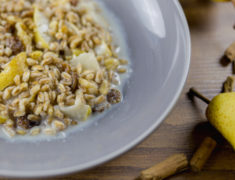 In a small pot add the 10-Minute Farro, water, cinnamon stick and salt. Bring to a boil over medium heat, then lower to a simmer and continue cooking for 10 minutes or until the farro is tender but still slightly chewy. Discard the cinnamon stick and drain any remaining liquid.
Add the whole milk, maple syrup, pears and raisins. Warm over medium-low heat until the milk thickens slightly; 2-3 minutes. Divide among two bowls, top with walnuts, a sprinkle of cinnamon and a drizzle of honey. Buon appetito! 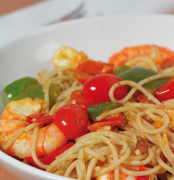